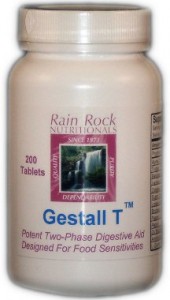 We are proud to announce that the new and improved Gestall T is now shipping.

We have changed the formulation to help aid the body with food intolerances and blood sugar control.

The best just got better!

Omnizyme® and Omnizyme® Forte have arrived and backorders are now being shipped.

A new shipment of Omnizyme® andOmnizyme® Forte will arrive on Thursday December 19, 2013. All back orders will begin shipping as soon as the shipment arrives.

Thank you for your patience.

We are anticipating that we will be shipping both back and new orders for Omnizyme® and Omnizyme® Forte during the week of December 16, 2013.

We anticipate delivery to us somewhere during this week and that we will be shipping as soon as this product arrives.

Please feel free to contact us ([email protected], 1-877-204-1953) to inquire about the status of your order or back order between now and then.

If the credit card information we have is out of date we will be contacting you as we prepare to ship orders.

Our apologies for the long wait.

There are some changes to the formulation to note 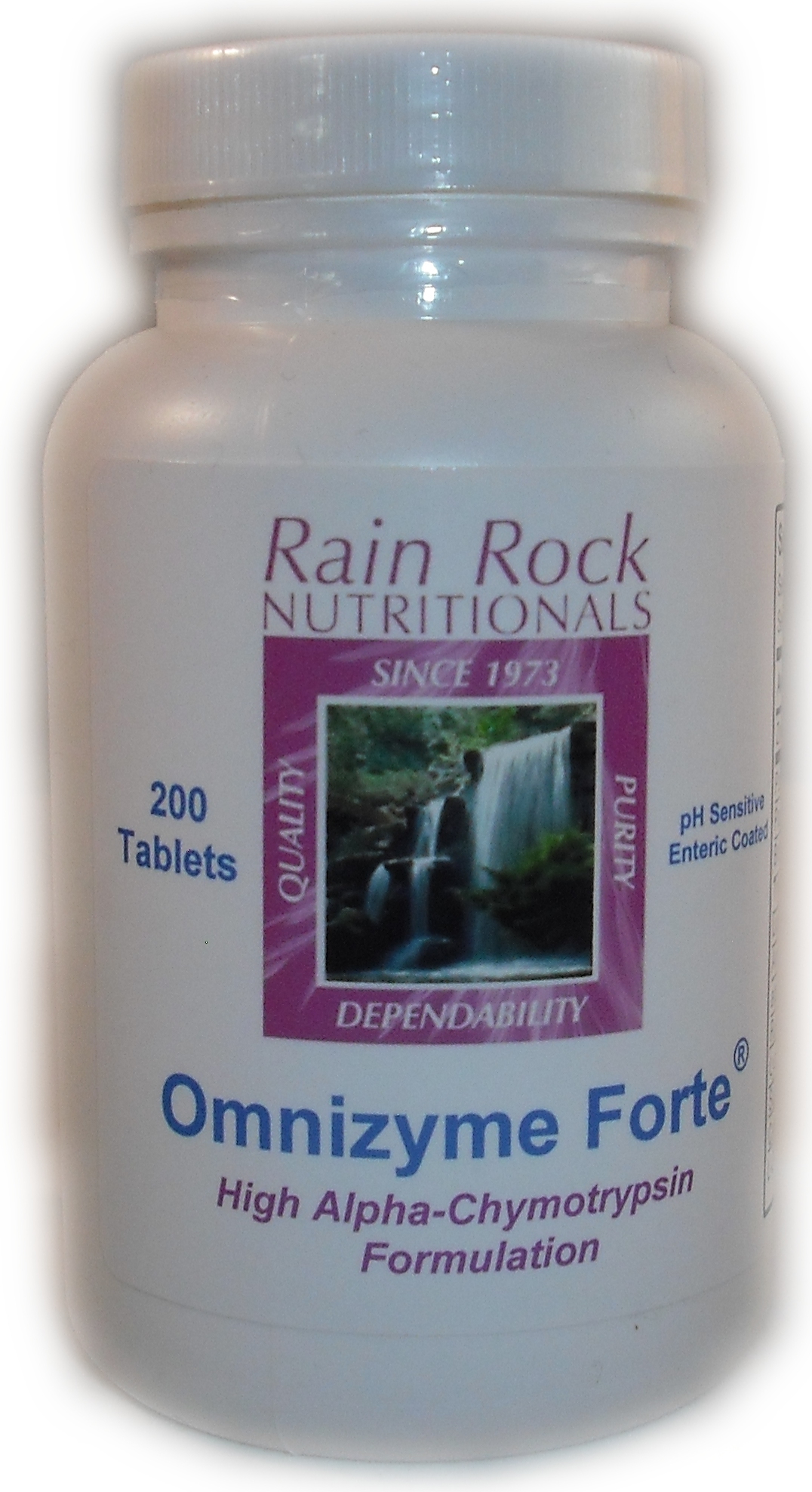 Why is the product delayed?

Currently, there is a world-wide shortage of one of the key ingredients of Omnizyme® Forte and Omnizyme®. High-potency pancreatin is in short supply due to the actions of a major raw material supplier in the international market who distributed pancreatin contaminated with an antibiotic.

This has created a shortage situation. All of the companies who now use pancreatin as a raw material are competing

for the existing and future supplies of the pure raw material. That means long delays and increased expense, not to mention increased testing to insure the purity of the raw materials.

While our manufacturer does not use this supplier they felt it necessary, and we agreed, that the raw materials needed additional testing which required additional time. Frankly, we’d greatly prefer to deal with a delivery delay than a recall. We are happy to report that all raw materials for both Omnizyme® Forte and Omnizyme® are now in house and fully tested for purity and potency to our and our manufacturers satisfaction. Manufacturing is now scheduled to begin.

So, when will it arrive?

According to the time range we have right now (it could change for the better) from our manufacturer is that we should expect arrival here somewhere between November 21-December 4, 2013.  If we can negotiate a more advantageous time we will announce it immediately.

Many of you are wondering why you haven’t been able to get Omnizyme Forte and have had to settle for Omnizyme, instead. Here’s the story.

In mid-March, just as we were supposed to be getting a shipment of Omnizyme Forte from our contract manufacturer we were informed that not only would the product not be delivered when promised, it would not be available in the near future. This meant that the search was on for a new manufacturer.

Well, the search took longer than we had hoped. We had several criteria that we insisted upon; GMP certification, manufacturing experience and quality, raw material availability, ability to manufacture in a timely manner and, of course, price. Finding a manufacturer with all of these qualifications was no simple task and we thought we were close several times only to have it all fall through due to one major problem or another.

After weeks of work and research we finally made our choice and have now gone to contract and Omnizyme Forte will soon be available again.

Will there be any changes?

Yes, there will be.  For the better. The new Omnizyme Forte will still contain nearly all of the old ingredients. We removed rutin due to  food sensitivity issues in a number of customers. It was a minor player in the old formula. The new Omnizyme Forte will be in specially enteric coated capsules instead of the tablets it has been delivered in. It will also be smaller than it has been in the recent past.

For many years we have been getting requests to put this formula in capsules. We simply couldn’t comply because the technology to protect capsule contents from the gastric juices in the stomach just wasn’t fully developed.

The advantages of capsules are many. There is no loss of enzyme activity due to heat of compressing tablets. There are fewer excipients (binders, fillers, granulating agents, etc. ) required to make the tablet hold together on the outside of the body and break apart in the correct spot on the inside of the body. In other words,  make the product work as it should. Capsules are, for many people, easier to swallow. The only disadvantage is size because tablets compress the ingredients and usually have a smaller footprint. We have also taken advantage of newer technology that allows us to use more concentrated forms of our raw materials and make the capsules actually smaller than tablets have been in the recent past.

Now we can report that the technology is developed to the point where we can deliver the product to you in capsule form with at least an equal, and in our opinion greatly improved, strength and quality. Thus we can now take advantage of that improved technology to bring you the most powerful and advanced proteolytic enzyme formulation available.

When Will It Be Available?

This is being written in late July. We expect to have Omnizyme Forte available in about 8 weeks from this posting. We expect to have an improved Omnizyme product manufactured along the same technology available shortly thereafter. As we know exact delivery dates we will post them here. In the meantime we will once again begin accepting orders for this product on a backorder basis which will be shipped on a first-come-first-served basis as it arrives. Get your orders in so we can ship as soon as they arrive! Order HERE

Some of you may have had problems with the 1 lb apricot kernel coupon, ak1. The problem that was keeping it from discounting the 1 lb bag of kernels is now fixed! 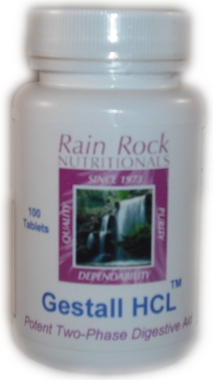 Are you or your clients dealing with bloating, gas, the “lump in the stomach” feeling? Wondering how to approach the problem?

Gestall HCL may be just what you’re looking for. It utilizes our two-phase tableting technology to help provide that extra support that individuals with digestive issues often need.

Phase one is the stomach phase of the tablet containing the betaine HCL and Glutamic  HCL, pepsin, gentian root, ginger root, bromelain, papain, and dessicated stomach. Phase two is the duodenal phase which is where the pancreatin, amylase, pancrelipase, ox bile extract and dessicated duodenum support are delivered.

Proper support for digestion can have many benefits in both the long and short terms  since complete digestion of the food we eat is critical to proper nutrient absorption and utilization.

If you think that some of your clients may need additional digestive support (see our technical bulletin on Gestall HCL for more information) now’s your chance to try it at a discount.

For the entire month of December (a BIG eating month!) we are offering Gestall HCL at a 10% discount.

If ordering online use the coupon code “GAHCL.” Wholesale discount will be applied at invoicing. Discount available to retail sales customers who order online ONLY! Retail sales by phone cannot be discounted!

It’s the time of the year. The weather turns cold and suddenly there’s lung congestion all around. Coughing, wheezing, chest tightness. A winter cough can be quite unpleasant.

Now’s the time to give your lungs the support they need. Pneumaplex is specially designed to give maximum support to these important but often neglected organs. It contains vitamin support in the form of Beta-Carotene as well as herbal support using Slippery Elm, Pleurisy Root, Foenugreek, Thyme, Yerba Santa and Perilla Seed Extract,

These nutrients seperately provide powerful support for many problems associated with the lungs but together they serve synergistically to create a potent all-purpose lung support supplement.

If you or your clients need a supplement designed to support the lungs through a tough winter (or any other season- they all can be hard on the lungs in different ways) then Pneumaplex is for you.

If ordering online use the coupon code “PNEU.” Wholesale discount will be applied at invoicing. Discount available to retail sales customers who order online ONLY! Retail sales by phone cannot be discounted!